Seems quiet here so I thought I'd share my first day off this week.

As per the title really, the last half a mile of ToTA 2019 the end of the repackable exhaust fall off. We were at the gates of Calais ferry terminal. 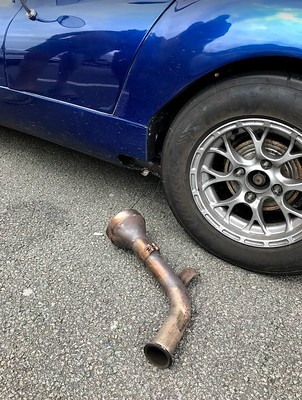 It's taken me a little time to get a bench made in the garage so that this can be sorted.
Today was "the sort it day".

I started with this 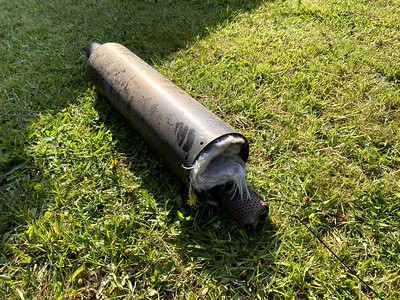 scraped out all of the stuck glass and got about repacking it (once I hosed myself down in cold water to make the itching stop). 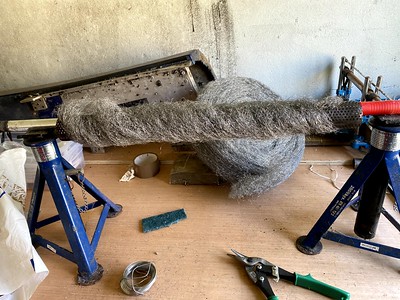 After I had done this I thought I had done enough, so sloped off back home for some research.

I found an old email in which I contacted an exhaust manufacturer on a comment they made on a forum regarding weight of packing for volume.
It was 150-125g/litre. Armed with this knowledge I got to work and did some maths. 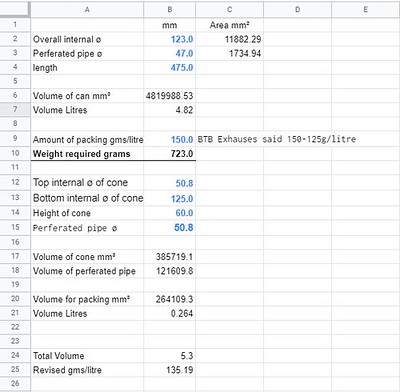 Knowing that the Polish lady who looks after me was at work, I risked it all and made off with the kitchen scales. She can't use the internet so I'm safe posting here. 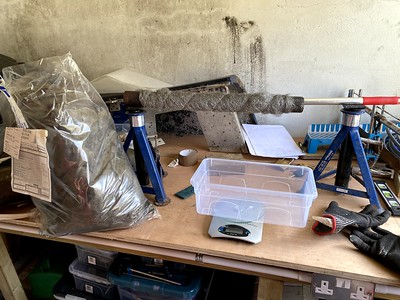 After weighing out what I needed, I set about packing the can. I knew it was going to be tight, so I had an idea, if I got a bit of silicone paper I could roll it up into a forbidden burrito, and slip it into the tight can. Then once all was good, slip the paper out. 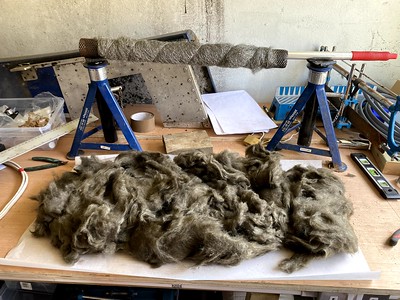 This proved to be a bollocks idea (no bad language filter thing on this site then?)

The second idea was to stick the perforated pipe in and pack around it using bits of conduit to push the basalt down. I knew this wasn't working well, as I could feel the voids.

The third idea was genius. 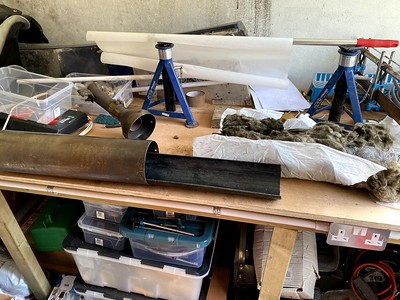 It just so happens that the bit of guttering in the garden was the perfect size. I went about constructing the badly packed kebab and slowly slid it in.
It worked a treat.

After all the pushing and shoving was over I had 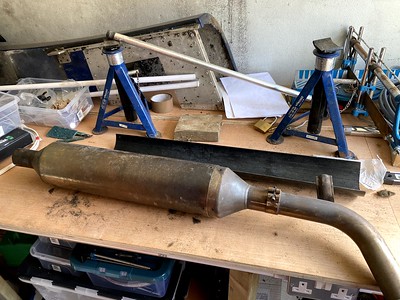 I've popped off to Halfords and got some 5990 to seal it with, and I'm now psyching myself up to get the stainless steel rivets out and start squeezing.

More later (not tomorrow as it's Rogate Downhill)
Top

It might have fallen off in the last 1/2 mile but I'd been watching it dragging/sparking along the motorway for s few miles before that.
Top

Before you send it, you should know he's had the filling for over 10 years intending to repack and it's almost 2yrs since it fell apart. Don't expect a quick turnaround!
Top

Before you send it, you should know he's had the filling for over 10 years intending to repack and it's almost 2yrs since it fell apart. Don't expect a quick turnaround!

It's like my Jester 18 years And it get a bit done every couple of years.Somthing else allways come's along

I gave up with mine, and just crammed it full of stainless wool.
My first attempt saw all the wool packing burnt and ejected within a few hours. Damned rotary being so hot and my packing skill being a zero.
Top

How does it sound, Dave?
Top

Thanks, its just a shame I've sort of stalled getting it back together. But this weekend

Users browsing this forum: No registered users and 3 guests