What to do for a rewire?

What to do for a rewire?

The cars still on its original ford loom and it's not great.

Should I look at doing the same again but with a few more fuses/circuits, but using blade fuses and not the little bullet ones.

Or should I look at something like what freewheel/blinkstop offer as seen at Stoneleigh. Little box of buttons.

Currently, the stalks have all the load going through them as there are only about 2 relays in the loom. The ECU is on its own loom so that's got a fuel pump relay on it.

What are peoples thoughts / experiences?

One thing I would like is for the loom to be fairly weather proof at the connectors.

I'd also like to use some bulkhead connectors. Any recommendations?

I've wired two kit cars using Ford looms as donors but I'm taken with the Car Builder Solutions 14 circuit kit. Looks comprehensive and easy to use.
I've used multi-pin connectors to facilitate easy bonnet removal. They've been the in-line type rather than panel mounted bulkhead sets.
I think I'd rather use bulkhead holes with grommets which allow additional cables to be run any time later. Bulkhead connectors would be neater but I'd want to have spare unused capacity when installing them.
I've also used a lot of flexible trunking (some split, some not) rather than loom tape.
Top

I have not seen the Freewheel/Blinkstop in person (other than fitted to a race car) and it was very much in it's infancy when I built my car. I am not keen on RF for critical signals so went for connections down the steering column with a 'slip ring' of sorts behind the dash out of site. I have watched Freewheel develop via social media and would certainly consider them now. I believe they do direct connection as an option, I have read about a race car that had gear change issues using the RF system, not at all surprised its not fast/reliable enough. On many RF control systems you send multiple messages in very short periods of time to make sure at least one arrives....you can't do this sort of thing with gear changes

My wheel turned out great anyway although all in (wheel, QR, connectors, carbon, switches etc) it was the wrong side of £500

All signals are low power and either switch via relays or for the indicators I have a connected to a Signal Dynamics Self-Canceling Turn Signal Module. This was chosen over Blinkstop as it had been around for longer....and the first one failed within a month of use so then had to get another!

Picture of my wheel are here https://www.locostbuilders.co.uk/forum/ ... tid=212279 I can't post them direct in here since Locost server updated it gets some pictures wrong.

For the rest of the car I did most of my own loom other than the engine loom which came with the Omex ECU. The loom is really very simple and I worked out loads, then wire sizes and started out by locating key parts then laying the wires from 'A-B' for each circuit. Doing one circuit at a time is so easy. This picture may look a mess but at this stage I had just started fitting connectors.

(this picture works but not the steering wheel one) 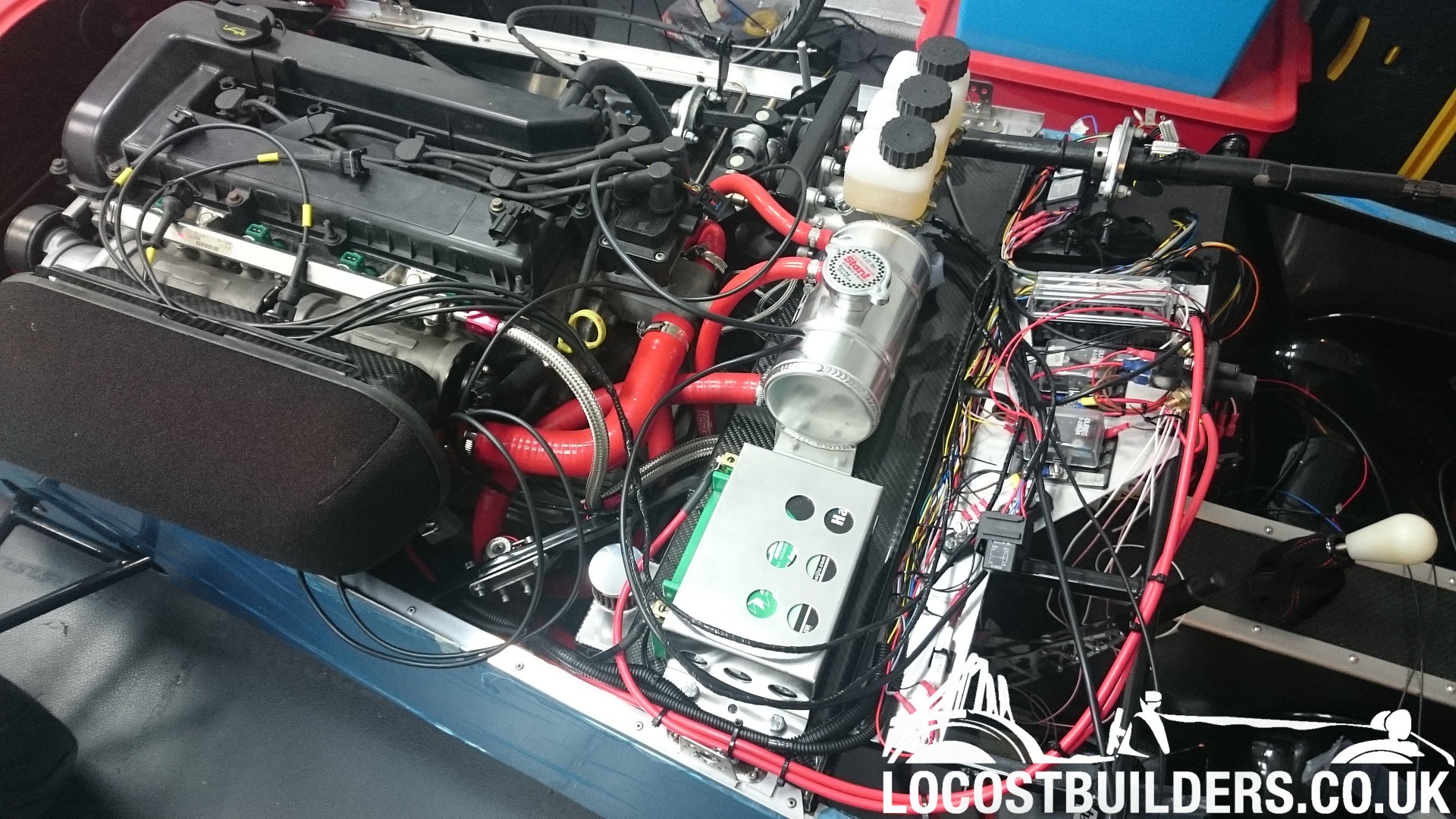 A mixture of heat shrink and flexible trunking, some split some not, was added as the wires were routed and all tidied up after final connections. Everything worked first time as it should and, other than the already mentioned indicator module, has been 100% reliable. I think the module is on its way out again as its started playing up one a short road trip last year

If/when it gives up I will be looking at the Blinkstop this time as I am feed up replacing this current module!
Editor of 'The Proper Job'
Top

Users browsing this forum: No registered users and 3 guests